Today we go into the mountains, we prepared our bikes got enough water (it is again 30 degrees with a clear blue sky). We started at the foot of mountain Postavarul. and took a not so steep path to reach the ski village Poiana Brasov half way the path it seems the path stops, but because the tip of Mihai we knew that we could go further in the woods and find a path that will bring us towards the ski village. This was quite an adventurous path. Anyway, not the place to try out new techniques (because a potential big fall if it goes wrong).

The first climb is now finished but we are not yet done for today, we went to reach the cabin at the top of the mountain following some hiking tracks that are also possible to bike. wow what a nice view from up here.

We didn’t reach the highest point of the mountain but stopped at 1750m altitude. The next part is the fun part going down again on a really beautifull track for going downhill again because Mihai told us how to go.

Small single tracks, with steep sides, a lot of rocks and roots of trees and some fast paths winding down.

The first part of the track was quite difficult at times. Then we reached the last part, which can also be seen on the video Mihai made with his friends . Finally we reached Brasov again and went to have a drink and a small snack. In the evening we went back to the terrace and met Mihai again to share our stories with him.

The GPS track is here.

The first biking day is here !! After a quick visit to Carrefour to buy some food (and to win 150 Lei 🙂 we went to pick up andy and on the way eat some breakfast. After we picked up Andy we went back to Relis place prepared our bikes and we left. we started with a nice climb towards an old citadel in the woods, we could even enter the citadel and look inside.

After this we went downhill met our first dogs and biked towards the next hill this one was almost too much for Erik (too little sleep) but he managed to get through after eating some more. We continued, we went through fields and some small hills and in the end we reached the gorges. A special place with a small river winding between two cliff walls really really beautifull. At this point our guide Andy and Reli noticed that we had little time left to return the bike trip to Cluj (we went about 45 km and needed to go back 45 km again) We decided that Erik and myself where going to walk through the gorges and Andy and Reli will return to Cluj and pick us up by car on the other side of the gorges.

The walking trip was a whole adventure, the small paths in the gorges are really not ment to take your bike with you, so we stumbled our way through the gorges. 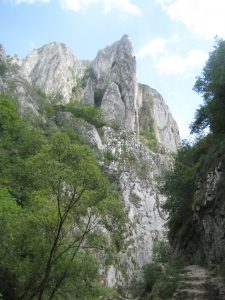 A nice view of the gorges

On the other side we relaxed and drank some beer. In the mean time Reli has send a friend, Christie, to keep us company while he was biking back and buying BBQ meat (mici) for our planned BBQ in the cabin of his parents. 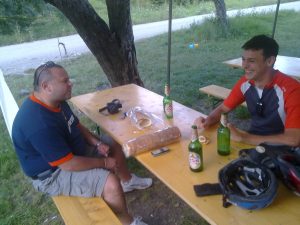 Relaxing after biking (Cristie and Bart).

Christie bought us some food known in romania as Kurtos Kalacs a from origin hungarian sweet snack. After 4 – 5 beers (i’m not sure anymore) Reli called, if we would ride up the hill because he is waiting for us at the road, we went up by bike from the gorges to the road, put our bikes on the back of the car and went to the cabin of Reli’s parents A nice wooden cabin in the mountains. The BBQ was fired up with wood and we had a nice evening. We are now wondering if they also sell Mici in the Netherlands. 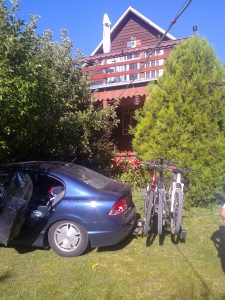 The cabin and the bikes on the car. 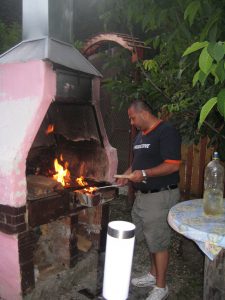 This is the very first post on mountainhoppers.nl. The site is currently being setup. The first set of blogs will be about our Romanian holiday. Then we will regularly blog about all our other mountainbiking adventures.