I thought it would be nice to visit the fixed mountainbike route of Rheden again. O, someone also made a nice film about this route.

It is advisable in any case to bring a GPS and the GPS track of the route with you when doing this route because the directions are a bit unclear sometimes. When they made the route, they used yellow signs for alternative routes and white ones for the main route. Yet, over time, the yellow became a bit less yellow, and the white became a bit yellow. This can be seen below: 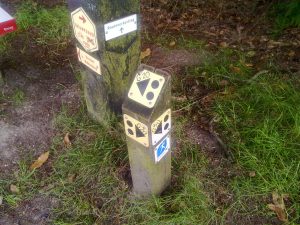 Somehow, I only visit this route once a year, but I think I should go more often. The route is beautiful. You are in the middle of nature and every now and then you encounter some animals along the way. Also, the route is just a little over one hour’s drive away, so in other words, just as far as my favorite route in Nijmegen.

A group of cows blocking the mountainbike track

Starting from the visitor center in Rheden and cycling the route in the clockwise direction (it is possible to cycle in both directions), the first 8 kilometers are a bit tough with some climbing and a lot of roots, but after that it becomes a bit more flat for the next 20 kilometers. Near the end of the route the hills start appearing again. I highly recommend this route. There are also some nice restaurants near the visitor center which makes this route even better.